Too Good for Goodwill

It’s summer camp time for my daughter (Aug. 2012). While considering the activities she’ll be doing, we realize she doesn’t have enough worn out, dispensable shorts. And the old ones she does have, are too small. The annual growth spurt has happened.

I dread the thought of her small supply of good shorts coming back home stained with mud or unidentifiable substances. The start of school is near and clean shorts are preferable.

I remember a friend going there to get cowboy and western clothes for a scouting event; i.e., cheap clothes for a one-time event. Maybe we’ll find some “camping” shorts.


“Hmmm… good idea.”
So Daughter #2, Daughter #3, and I hop in the car for our Goodwill adventure after I dig up my discount card that has been stamped the required four times for making donations. (Something told me to keep it.)


When we get there, we go to an area that has denim hanging on the racks, but discover it’s the women’s section.
“Quite an organized place,” I marvel. “Let’s find the teen section, girls!”


On the other side of the store, the junior and children’s clothes are grouped by size, and even color in a few places.  This is easier than being in a big discount store, like T.J. Maxx, where I usually get overwhelmed and a headache if I’m not in and out in 20 minutes.
The girls and I push the clothes to the left, and then one by one, but super-fast, slide each item to the right as we pull from a good supply of shorts, jeans, and light weight jackets.


Daughter #3, the camper, is a bit skeptical; however, when we go to the fitting room (who knew? although it makes perfect sense to have one) and she tries on the clothes; “Eureka!” Not the fresh from the factory look, but everything is clean and normal, appearing to come directly from my dryer at home.
There is one little episode that I have to address. Daughter #3 might have a twinge of embarrassment because another shopper is close by. She begins to talk about camp and about Daddy being “out of the country.” This is probably her way of saying to the shopper, “Surely we can afford regular stores if Daddy can afford to be on business out of the country, right? We’re just in here getting things that we will throw away or give away later.”


Sooo… When I have the opportunity to whisper to her, I tell her that it is not necessary to say things that imply, “We have money.” Of course, she denies this as her intention.


That little trip to Goodwill causes me to think about matters of pride and economic status.  Why can’t we (some people) shop side by side with poor people, low income people, and frugal people? Why do we feel embarrassed at Goodwill, but not at a yard sale? Why do we have to have a reason for being in a discount store or thrift store?  “Oh, I’m shopping for vintage clothing,” one might say.
Will I go back?


It was such a deal; nineteen dollars for several items! With my discount card and their “colored tag of the day” items being 50% off, I felt like an Extreme Couponer!
When I asked my 20-something year old friend (unemployed at the time) how she managed to wear a different dress to seven weddings she recently attended, she said, “Goodwill!” We laughed and then I told her of my conquest.

(By the way, I hear that the store in the rich folks section of town has some really good stuff.)

Again… will I go back?

Here comes the but…

I will probably go for a particular reason; not to shop for clothes. However, if I just happen to walk by the jeans, I might just slide through a few things on the rack to see if I get lucky. 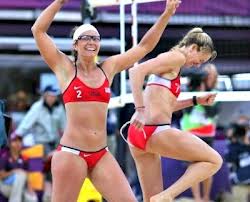 Another Summer Olympics has come and gone. It was a good one; containing all the elements worthy of the time many of us spent watching it. There were records broken, a few “firsts,” good-byes to great athletes who claim they are done, showmanship, bragging, an awesome showing for the U.S. women, and even disappointments that pulled at our heartstrings.


Did you notice anything else about the Olympics? Like, uhhh… the uniforms?
Is that what we call them… the “clothes” they wore as they performed amazing feats of strength, speed, agility, and endurance?


Would "costume" be a better term?
Is it just me, or does anyone else think there is hardly anything left to the imagination when looking at the “uniforms” of the athletes?


I know, I know. *sigh* If you’ve read my post on breasts, then after reading this, I will surely have a reputation of being overly modest; though I’m not.
But come on… I can probably identify Misty’s and Kerri’s butts in a line up. And the swimmers and divers?  The girls’ suits are cut as high in the front as they are in the back. The guys – I’m at a loss for words. All I can say is - hair removal must be big business.
So what’s the reason? Is it the same one they use during the swimsuit competition at beauty pageants; that the judges need to see the muscles and lines of the body in order to score accurately? Does this apply to male runners dressed in onesies who win based on, uhh… time? (Actually, I have Googled a little and read that there is supposedly a science to many of these “outfits” to increase performance.


Question: Do you look? Look, meaning: stare, evaluate, ogle, envy, criticize, admire, and/or fantasize.
You don’t have to answer; however, I’ll personally say that the exposed abs on the women runners are to die for! What do they call that look – washboard abs (if you’re a baby boomer) or a six pack (if you’re younger)? Makes me wanna drop and do 100 sit-ups.


Anyway...
I’m not sure how I feel about this; the enormous amount of skin we chose to show nowadays. I was sitting in my car in a parking lot during high school volley ball season, when I looked up and saw a blonde ponytail swinging from side to side. When my eyes dropped to get back to the book I was reading, they stopped when they landed on her perfect little curvaceous rear end, tightly outfitted in what I thought were black underwear. (Hers were extra short and small.)

“Oh my,” I mumbled, as she sashayed into the Subway for her after practice meal. My friends would later tell me, “Oh yeah, Anita; that’s what they wear.”


Would I let my daughter leave the school gym wearing Spandex that has a two inch crotch? Would I even let her play in such? Would she be the only kid wearing baggy Spandex instead?
I seem to vacillate between accepting the clothes that young people wear and shaking my head in near disbelief.


They are beautiful; young people in good shape, that is. Should they flaunt it if they have it? Did I wear comparable clothing when I had it?
On second thought, I didn’t quite have it.


Should they be allowed to express their sensuality and freedom while they are young? A friend told me that her husband thinks his 14 year old daughter should. (In fairness to them, they weren’t talking about the prosti-tot look or similar.)  My husband, on the other hand, is having a difficult time handling the sight of his daughters in tight jeans.
Can life be fun and exciting for them with a little more covered up?


When I see Muslim women (some, beautifully dressed), I wonder if they feel sexy or attractive with most of their bodies covered. Is it necessary to feel sexy and attractive as you’re squeezing tomatoes at the grocery store?
Oh, that’s right… I’m supposed to be talking about hot bodied young people; not moms at the grocery store. But still… I wonder what Muslim women, who cover, think of us; or the Amish; or the Duggars? Do we care? I can only imagine – on both ends. Smile