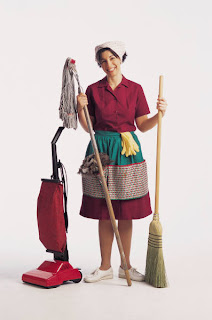 I live in a big house. My husband and I didn’t need it and didn’t have to buy it, but because of his interest in architecture and cruising neighborhoods to look at houses, his decent income, assets from my unmarried miser days, my inheritance, and a low interest rate, we woke up one day in a new house waaaay bigger than the one we left. All it took was asking the salesperson one question and the snowball began.

Yes, there is much more house to clean, but I’d be lying if I say size is the reason for lacking a thorough cleaning process. Truth is, house cleaning has never been up there among my list of favorite things to do. Bending over a bathtub… how hard is that! I twisted my back when I was pregnant fourteen years ago cleaning it (or was I bathing the kids?) and I am reminded at least once a year of that incident with a shot of pain.

Cleaning the toilets—that’s Girl #3’s job. She goes from toilet to toilet with her cleanser and a brush that has an additional thumb-like brush attached for cleaning under the rim (that doesn’t work). I’ve got to teach that girl how to get down and dirty with a sponge!

Changing the sheets of a king sized bed that includes a blanket—mindless walking from one side to the other and back, over and over.

Speaking of pregnancy… After Girl #2 was born, Darling Husband suggested a cleaning lady to help while I was getting adjusted to having two children. We were in our previous house then, but it wouldn’t have mattered where or what we lived in—I needed help. Taking care of the demanding babies (that included breastfeeding), minor cleaning, paying bills, going to appointments and play dates, minor cooking, and taking my occasional shower, something had to give.

The cleaning lady was my gift, I suppose, for having the kids—at a very advanced age, by the way. She was supposed to be temporary—and she was—for ten years. Every two weeks, Sharon came to my home for three hours. In that time, she cleaned bathrooms, vacuumed carpets, and mopped the kitchen floor. Sometimes she dusted blinds and shutters and did other small jobs that needed attention.

It was odd at first, having someone cleaning for me; but with all my other responsibilities, I never got to revel in the fictional, so-called, lady of leisure role. Instead, I’d wake up on Sharon’s Day, announce to DH and the kids (when they were older), “Miss Sharon is coming today! Let’s pick up our things. Clean up!” My mother and friends without help, would ask, jokingly, “Why are you cleaning? Isn’t your maid coming today?”

“She’s NOT a live-in, 8 hour a day maid! She’s a cleaning lady! And if we don’t get these toys off the floor, she can’t vacuum.  And if our laundry is still in the bathroom, it might be a little embarrassing.” Blah blah blah…

Sooo… for ten years, minus about ten months without Sharon and me ultimately begging her back, the cleaning routine was: rolling up my sleeves every other week to work with Sharon (me, in another room) to clean a house that stayed reasonably clean (maybe a half day) until someone started the downhill cycle again by flossing and brushing their teeth; hence, getting plaque on the mirror and toothpaste in the sink.

I’ve heard a lot of opinions on cleaning help, i.e. maids, cleaning ladies, cleaning services, housekeepers, domestics, etc. What I have gathered from it, is that people think: 1) you are lucky to be able to afford help 2) you are lazy and/or spoiled if you hire help 3) you shouldn’t have a house too big to clean yourself 4) some women take pride in how clean their home is and make it a priority to keep it as so by cleaning it themselves  5) some women want help but feel guilty about spending the money and/or by admitting that it’s a hard job that depresses them 6) some women feel that it is their job to clean and a reflection on them as a woman, especially if they are “stay at home moms” 7) some women have husbands who insist on cleaning help because they don’t like seeing their wives working hard and/or because Wifey is doing a lousy job 8) a miniscule amount of women say they don’t need help because their husbands do the cleaning 9) someone told me that the bible book of Proverbs tells of a woman who has maid servants, so why not have help 10) some families ALL pitch in and don’t need help 11) some people feel: to each his/her own.

Sharon left us about five years ago and I never sought a replacement. It was time for the kids to clean their own bathrooms and vacuum their own bedroom rugs. Also, I was tired of the scheduled routine; cleaning in a flurry. Another reality is that someone is in your home-- sometimes when you are there and not in the mood for a “visitor.” Of my friends and neighbors who have help, some treat the relationship in a total business sense. The woman or crew comes in, works, and leaves. There is no personal conversation.

My situation was different. Sharon and I became friends; not hanging out friends, but friends who had personal conversations and who gave each other gifts and did things for each other’s children. If I ever feel the need for help again, I’d skip the personal relationship… but who knows?

And lastly, I should say that this is not about having a big house. Cleaning is an ongoing job, regardless of square footage. Small apartments, trailers, ranchers, mansions—it doesn’t matter. Some people enjoy it; seeing their home transform into a dustless wonder. Others *sigh* are a bit challenged. That would be me; although, I’m superwoman when cleaning the kitchen. And DH and I are great at managing to keep a tidy downstairs, sometimes resorting to putting things in bags and pushing them into the closet when company is coming.

Image from Microsoft clipart
Posted by Anita at 1:02 PM 26 comments: 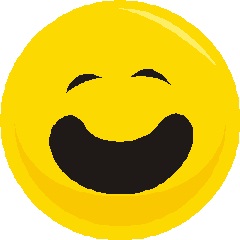 Erma Bombeck became a big favorite of mine when I discovered her newspaper column in the 1980s. I also read some of her books which I found to be very funny; but as funny as I think her work is, there are others who may not.  I suppose if all humans had the same personality, including sense of humor, we’d be virtual robots.

In my family, there are times when we all laugh together and of course, times when we don’t. For example: Most people who’ve seen the long running TV show from the 1950s, I Love Lucy, laugh a lot when watching it. On a marathon Saturday, when one episode after another is aired, my husband and children sit, watch a couple shows, and have the best fun. Me… no. It wasn’t one of my favorites as a child and has never been a “gotta stop and watch” show for me. I recognize that Lucille Ball was a comedic genius and I’ve had many laughs from the show, however, it’s not high on my list of best comedies. Interestingly, I’d do better watching a Carol Burnett rerun, someone who also does physical comedy.

The sense of humor factor gave me cause for thought after reading an article in the Huffington Post about a woman who does the happy dance at the bus stop on the first day of school. This year as the bus rolled away with her two sons in tow, Mom (Tracy Moutafis) danced to Bye, Bye, Bye by NSYNC. I totally “got it.” Years ago when most of my neighbors (on the street of my previous house) had small kids, one of the moms let out a yell that could probably be heard a couple blocks away as the bus became a yellow speck down the street. Even I got caught up in the dance thing when my last one went to kindergarten, though I limited it to 3 seconds and had no music accoutrement.

After laughing at the video and smiling while reminiscing, I read some of the comments. While many felt as I did, the other half commented with these responses and more that are worse: “She might not be embarrassed, but her kids will be!,” “One day her children will dance as they bring her to the old age home, ever close to that life insurance money,” “God forbid but how proud of this video is this lady gonna be if something bad happened at school and that child did not come home off that bus that she was publicly celebrating him getting on,” and “What a shameless cow.”

Did I miss something?

Okay, I realize that the dance celebration would not be funny to everyone—especially new moms; but to get so worked up?

So you might say that a bit of pushing the envelope makes me laugh. Raunchiness – No. Other people like corny jokes and acts. I like that, too, but it might not give me a gut busting laugh. And jokes that are too long tend to lose me. Physical comedy is good when paired with a good line or two, like seeing someone demonstrate how they used the squat toilet in India for the first time—funny!

It’s not just professional comedy that I’m speaking of.  It’s the unplanned conversations with family and friends that elicit some of the best laughs, because we all know that the quasi ridiculousness of life provides us with some very good material.

What makes you laugh? What’s your brand of humor?


image from Microsoft clipart
Posted by Anita at 5:13 AM 14 comments: