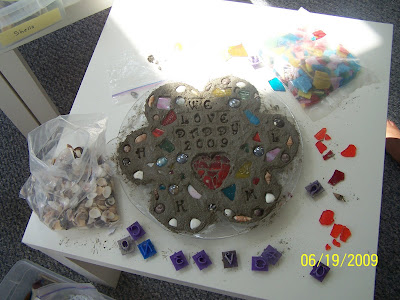 I know I’ve said this before, but I’ll say it again: children allow you to have a second childhood. Entertaining my kids, teaching them, and exposing them to new things, inspire me to do things that I probably wouldn’t do if I didn’t have them.

My first stepping stone was made in 1999. I can’t remember what prompted me to make it. Had I seen a decorative stepping stone in a neighbor’s yard? Did I see the kit in the craft store or in a Family Fun magazine? I don’t know and it doesn’t matter. What I do remember is having two toddlers and wanting them to somehow be involved in their daddy’s Father’s Day gift.

The stepping stone kit was purchased at Michaels, the arts and craft store. I had a choice between a gray stone and terracotta colored stone, which was made with the regular cement and an added pouch of the terracotta mix. I chose the terracotta. Also in the kit was a plastic round mold, beige rocks, a craft stick (when I was growing up, it was a Popsicle stick), and a mixing stick.

The process of making it went well, considering it was my first time. I found a plastic bucket, poured in the dusty cement (cough, cough), added the water as instructed (which was not enough to get the right consistency), mixed, added more water – a tablespoon at a time – mixed, and poured and scraped it into the mold. Somehow I got it just right; it was solid enough to do the lettering with the craft stick and to place the girls’ hands on it for the imprint. Hayley and Kelly, then three and a half and fifteen months old, placed the rocks and pressed, with a little guidance from their meticulous mother. 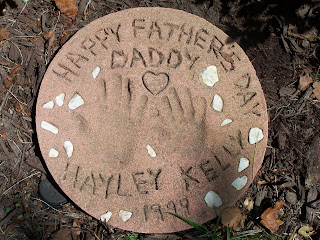 Father's Day gift - 1999
There would be seven more stepping stones. Over the years, the girls and I have experimented with different shapes and decorating pieces. We’ve learned that:

- adding too much water causes our letters and imprints to disappear; that we have to use paper towels to sop up excess water on the stone, or that we have to come back to the process later after some of the water in the stone has evaporated,

- buying a plastic container at the dollar store and reusing it year after year, is better that using a good mopping bucket that has to be cleaned afterwards,

- cement from a hardware store that is typically used for sidewalks or whatever, contains all sorts of pebbles and stuff, and is difficult to work with…never again,

- using photographs under glass to decorate the stone is tedious, and that the sun eventually fades the pictures,

- breaking tiles to use as lettering is also tedious. 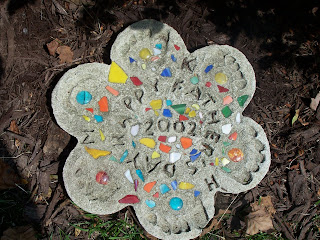 There was no stepping stone in 2000. My new baby was one month old. Couldn’t waste valuable sleep time on crafts.

I don’t know what happened to the 2001 stone. Is it buried in the yard somewhere? I thought we made one that year. With three children 5 years old and under, maybe I was a little delusional. I can almost swear we made that stone, despite the lack on evidence, i.e. a stone. 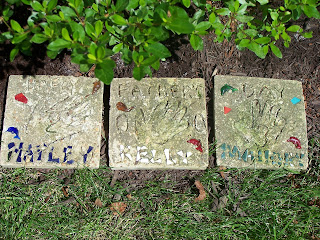 2003 - made from hardware store cement
AND
I dared to make three!
Notice the lettering from broken tiles -
I'll bet you can guess who did most of the work on these stones! 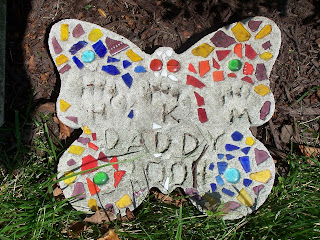 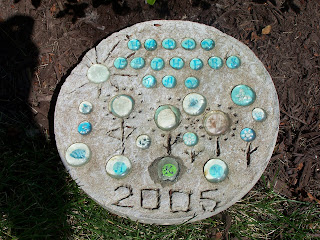 "Happy Father's Day" (The blue letters are still there, though).
The glass over the K (for Kelly) was gone,
so I fixed it with a new K and new glass.
Too much work for this one: a so-so stone. 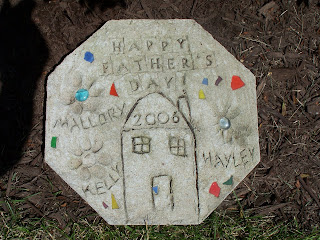 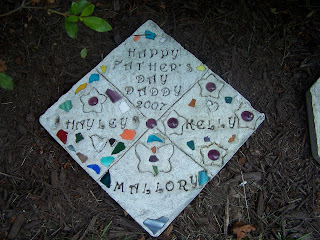 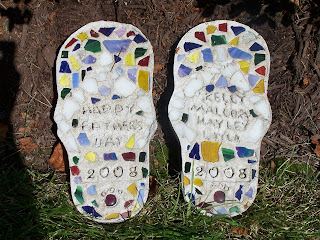 As you can see, all the stones were made for my husband as a Father’s Day gift. He says it’s his favorite gift each year and tells us not to worry about getting anything else for him other than cards. He was especially adamant this year when he made that statement, but when the iPod touch showed up on the gift table, he didn’t tell us to return it. 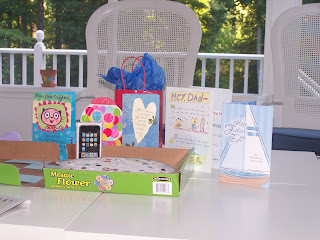 The annual stepping stone is a fixture in our lives now; we may even step it up to twice a year. And now that I’m decluttering, I know where all the previously used, various shaped molds are stored, along with all the leftover rocks, cut glass, tiles, and lettering. We can omit the kit next time and just buy the cement.

Have you made a stepping stone lately, or are you willing to make your first?

What a great idea. My favorites at 2005 and 2007. Once I've wrapped up our mermaid project, I may scoot over to Michael's and see what we can do with some stepping stones.

HILARY, I'll be waiting to see your stepping stone posted on your blog. Hope Mo and Co will enjoy the project.