The World is Changing - Part 2 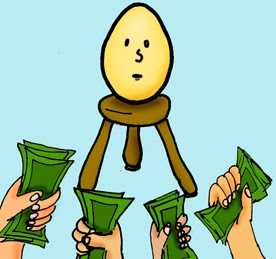 When I wrote a recent post with this title, I didn't know that there would be another.  Tere, Hhe subject matter is different; however, my thoughts on both posts stem from witnessing life situations that feed my curious nature—the first one, seeing “other” as a third gender selection on a registration card, and now, the rise in egg, embryo, and sperm donations.

Years ago, it didn't seem strange because I viewed it, simply, as a married couple needing sperm to make a baby when the husband’s sperm count was too low. It was actually a while longer before I realized that women were donating eggs. In either case, I thought of it as charitable; helping others to have long awaited children.

But since I’ve had my children (almost 18 years), I don’t gloss over these stories like I use to. My innate sense of fascination with the making of a baby has been heightened by constant media attention. A couple weeks ago, I saw a news story about a woman donating her eggs for a substantial fee. Young, smart, and attractive, she seemed so nonchalant about it; though she said she was happy to help couples have babies. As a repeat donor, I wonder how many children will carry her DNA. The same for men—how many children are created by their donations.

There’s a movie titled Delivery Man that is being released this month. The adult male character finds out that he has unknowingly and biologically fathered 533 children. Based on a trailer I've seen, he ends up having relationships with many of them.

Maybe 533 is far-fetched, but how about 100, or even 25? This is big business. Do egg and sperm donors truly know how much of themselves proprietors are selling? It’s a little unsettling to me; however, I am not against it for certain people. I actually know someone who has a child via artificial insemination. Hers is a common story—single woman without a boyfriend and who does not see marriage around the corner, but really wants to be a mother. She told me and a friend (Donna) her story and that she is honest with her son about his beginnings. He is in elementary school, living a typical childhood, but is experiencing a little moodiness here and there; all kids do. But Donna (who was adopted as a baby) and I read each other’s minds and wondered if he’s starting to want to know his other genetic side, or for that matter, the other person—the biological father. A grandmother of two, Donna just found her biological father earlier this year.

As I was surfing the web for this post, I found a diatribe of a sperm donor detailing the awkward donor application process (just short of humiliating), the embarrassing creation process, and the life altering effect that it has had on his life; the latter causing women not to date him when he tells them his story. Can’t say that I blame them.

The donor guy also wondered about the possibility of accidental incest among the numerous children he has probably sired since the parents of these children are likely to be living in the same city or state. Hmmm…

And then there are the frozen embryos that are not carried by the natural mother. I suppose their implantation into carrier moms is more controlled than the distribution of eggs and sperm, but who really knows? Based on loose regulation in all these cases , I don’t think we know neither the full and overall extent, nor the future impact—health wise, legally, etc.

However, so many people find these processes necessary and consider the outcome, their children, very worthwhile. I know a couple who have a child created by another couple then carried by a surrogate. Five hearts have given a little girl life and she in turn, is giving her parents much joy.

Cynthia Wilson James, the founder of InSeason Mom, has featured me on her blog as the November InSeason Mom. Her organization supports "older" women who wish to become pregnant, are pregnant, and new moms. This is a re-run of my story, but to those of you who did not read it when she initially posted it, you can click here to find it. No anonymous contributions in my case, but Cynthia did feature a woman on her September 6, 2013 post who has a child from a 19 year old frozen embryo.

I've always thought as you did, and I also have a single friend who has 2 kids through a sperm donor. However, you've brought up a lot to think about. Hmmmm.

The only part of this I can discuss with a degree of intelligence is that of the older parent.

i will be back...have not read your post, but wanted to comment that I found the second Gilbert not as intriguing as the first book...but Eat Pray Love seems to be like Golf, you either love it or hate it.

You have highlighted a situation with a lot of details to consider. You have already mentioned some.

Thanks for sharing your ideas on this.

Well, I never looked beyond the donation process until now. I think I've always considered that having a baby through donated "components" was sort of like adoption in the long run. I wonder how long until "the old fashioned way" becomes old fashioned?

Very thoughtful provoking post. Not certain how I feel about the egg/sperm donation. Can expand into how many children are out there without homes now - a different topic, I know.

Odd to think how many children could come from the same sperm. Almost like science fiction.

Will think about this while playing kickball with middle schoolers today.

So many different aspects to things like this. On one hand, I am thrilled that it helps people who want babies and can't have them, but on the other, it opens up whole new doors we as a society have never had to deal with. Very intriguing post, my friend~

I find it hard to comment on this subject without sounding judgmental, because I am judging the morality of the actions, though not of the people. I'm Catholic and the Catholic church teaches that those techniques are wrong because they separate the unitive and procreative aspects of sex. It teaches that children have a right to be conceived within a marriage and to know their parents. Those artificial techniques are to meet the desires of adults, not to meet the needs of children.

So many aspects to think..Call me old fashioned, but I find donor conception an incredibly selfish.

The world really is changing.

I don't know if it makes sense to run faster trying to keep up or to just become one of those old people saying, "I don't understand the world today."

Hope you have a blessed Thanksgiving!

Thanks for taking the time to write these thoughtful posts!