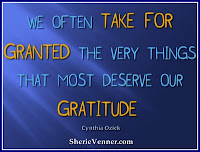 Coincidentally, each of my daughters and I have had a conversation this week about situations involving people being taken for granted which prompted me to give it further thought. Independent soul I am, I tend to notice when actions or feelings are not balanced between two individuals; not that everything has to be tit for tat, but it shouldn’t have the proportions of Person A giving 95% and Person B giving 5%.

I’ve avoided the obligatory, reciprocal acts by doing things on my own or by explaining to people in my life that there are certain things I rarely do – like having a big party at my home. Family and close friends are as much as I can handle, and even that’s because my husband does the planning, shopping, and cooking! I could never be in a supper club where, let’s say, five couples have a meal together once a month, rotating homes and cooking duties; sometimes, the host doing all the cooking and buying all the booze. Or the other kind of dinner club where mothers of young children trade nights to serve each other dinner, giving nights off from cooking. I knew a group of women who did this. On Monday, Mary would cook for Jane, Linda, and Marsha’s families; plus delivery. Then she’d have three nights of dinners delivered to her family from Jane on Tuesday, Linda on Wednesday, and Marsha on Thursday.

Not my thing, but I see the advantages of sharing. It’s a win-win for all involved when no one in the group is taking the others for granted.

So if people know that I don’t host big parties, I’m fine if I don’t get invited to theirs; or they can invite me if they’d like. (We usually show up with something in hand.)

One of my daughters has noticed that her printer is being “borrowed” by her college housemates at a growing rate, resulting in increasing ink and paper expense. And let’s not forget wear and tear. Nice girls, they are: they ask, but they don’t offer – money, that is.

Girl #2 has noticed that having a car to drive means “chauffeuring.” Fortunately, her closest friends have access to family vehicles and they take turns at being the driver; however, she sees other situations at school where the balance is lacking. Some cases can’t be helped (they’re teens), but an offer of helping with gas is always an option.

Girl #3 isn’t behind the wheel yet and has to rely on parent chauffeurs – my husband and me or friends’ parents. I’ll admit it – when another parent drives, it’s a treat for me; however, I’ve had to explain to darling daughter that the carpooling has to be shared and that she needs to ask us so that we can figure out if it’s our turn or not. Don’t want to be known as the slacker parents who take the others for granted!

Bottom line: In all their conversations, the solution advised was good ol’ communication, as awkward as it can be. If I’m taking someone for granted, I want to hear it... Really. My feelings might get hurt, I may be embarrassed, or even annoyed, but if it’s true…  *sigh* I’ll do some something about it. And likewise, if someone’s using me, or you, knowingly or not, it needs some thought and maybe some action.

The conversations with my girls pertain to kid stuff, but adults have the same issues… right?

Image credit is written on the image
Posted by Anita at 10:25 AM

Some of that is just bad manners. Use the printer all the time, pay...don't offer, just pay. Sometimes like you say, you need to ask for compensation if it starts to bother you. People do not always realize they are taking advantage.

I've got to admit, people don't usually take me for granted - is it because I'm so old? Of course, I try not to take others for granted either. Sometimes, I don't want to drive, but if I don't, I always pay for gas. I NEVER have large parties - family is large enough. However, I make sure to take a nice hostess gift if I'm invited to another's large affair. Also, I used to have a hard time saying "no" but now if that's my inclination, I'm honest. Age does have its benefits, Anita.

I'm a lot like you. I don't like to host big parties, and I absolutely don't want to take on other responsibilities when I have so much of my own. Then again, I don't ask others to do it for me. And if they do, I reciprocate with cash or gift cards or something in return. I'd hate for someone to think I was taking advantage of them.
As for my kids, I try to be sure they are not taking advantage of their friends. If I feel they're taking too much, I make sure they return the favor - usually in the form of gas money or food certificates. And I would hope their parents would do the same.

Communication is always a good policy. Hey gals I drover you yesterday and the day before yesterday, so put some money in this here jar if you want a driver for today. Hey roomies, I can no longer afford ink for the printer and since we all use it could you two split up the costs of the next cartridges? If they balk, then it is easy enough to not allow use of the driver or printer or whatever. Yes, sometimes money is a big issue, but flexible is the way to dgo.

Hi Anita!
Honestly, I have just started by saying NO. It doesn't always come easily. Some people really don't realize they are taking advantage and communication works well, but some can go too far and toleration ends.
Great post as usual!

Yep, good ol' communication usually is all that's needed. Like chauffeuring kids - "I'll drive next time", usually helps clear things up, because there's ALWAYS a next time. If not, I supply gas money and remind Meego about a dozen times to give it to the driver.

When my oldest college boy had dorm mates, they constantly ate food that he'd bought without replacing it or offering their food money. He noted that all three roommates were only children, and we wondered how much that was a factor. Never had to share?

For P.E.O., we have meetings at each others' houses. I never sign up to hostess because our house just isn't set up for a meeting that size unless some people want to sit on the floor. Plus, no convenient place to banish the husband and kids to. I let those things be known and it's not a problem. I find as I've gotten older, I don't have a problem with just stating the facts and the practicality.

But yes, it can be tricky. Like with our neighbor that killed an antelope, then gave us a chunk of meat. Do we have to go kill something him now?

The daughter with the printer could figure out how much it costs to print a page and put a donation cup on the printer with suggested price. Yes, I do know how it feels when things aren't balanced between the giving and getting. I had one of those conversations yesterday where I was asked to volunteer my time and talent for a cause that I don't care about from a person who only asks without giving. Maybe one of the pleasures of getting older is that I don't feel a need to do these things any more.

Joe at Cranky Old Man has continued this conversation at his site. Click over to read his being "taken for granted" story. It's work the minute. :)

I find it easier now to say no, but it's taken me years to do it. Kids are scared to lose their friends so they quietly fume rather than just say "Hey, we are all using the printer, but it appears that I'm the only one paying for the paper and ink". Easy to write here, but for many people it seems a tough thing to verbalise in real life.

We tend to host big parties maybe once a year, get everyone round at the same time. Get it over and done with and all the drama and hassle out the way in one day. I'd never want to entertain small groups regularly, and because of that rarely get invited back to other people's dinner parties, but that suits me just fine. :D

Interesting, thoughtful post.
The theme of reciprocating, although in one sense only fair, can be unhelpful in some situations. I recall, many years ago, debating with my wife about the expectations around giving presents (at birthdays, Xmas) and I argued - rather cynically - that often we only give presents to avoid the discomfort of not having reciprocated (rather than for the joy of giving per se).

First of all, thanks for stopping and checking in. :)

I've had similar conversations with the kids, but more in the vein of them picking up after themselves and doing things for themselves instead of expecting others to do stuff for them. They are lucky in that we have help, but they are older now and I expect them to be able to do certain things for themselves and not rely on things being done for them. Having help is a privilege, but we might always have it. Situations might change and we cannot always count on having help all the time.

It's never a bad thing to urge your children (or anyone around for that matter) to appreciate the things that are always there. I think the world would be a bit kinder if we all stopped for a while to consider these things.