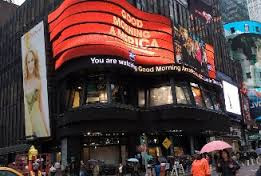 Kelly and Michael. If you don’t recognize these paired names, then you are not a Celebritydom visitor.

One of my visits happen at 10 a.m. two or three times a week. I sit at my kitchen high chair, sideways to the counter, with my 15 inch TV in front of me as I eat my breakfast. I don’t usually stay for the entire show – unless the kitchen needs major cleaning - but I always make it through the host chat.

Like a lot of people, I bought the chemistry between the two of them; the “TV wife” that Michael referred to her as, and how he called her “my lady” while telling her to cover her coffee mug before they shook their confetti sticks.  When I heard that he’s leaving, I gasped with disappointed surprise. Why? His position, which was likely approved by Kelly, a job that catapulted him into the big league, beyond the “already successful” status that he was enjoying before Live… Why? Doesn’t he owe more than four years?

Does he? Or is it my selfish desire to be entertained while I eat my cereal and fruit, or on a ravenous day, my bacon, eggs, and toast? Yes… that’s what it is. My charming and personable breakfast companion is leaving me.

As the days passed and each gossip TV show added more to the debacle (the snubbing of Kelly from the powers that be), my thoughts and interest grew along with them; especially during the highly anticipated re-entry of Kelly to the show after a few steam-filled days off. She’d be back on Tuesday, everyone was saying… which just happened to be the morning of my mammogram.

Umph! I’ll have to record it!

Funny… I never did watch it; didn’t have to. Every time the TV was on, someone was showing a clip of Kelly’s angry, yet composed, speech. Between her and Prince, I sacrificed Wheel of Fortune and Jeopardy to watch ET and Inside Edition.

Anyway… As I watched, I sensed a vulnerability in this woman who reportedly earns $15 or $20 million a year. And then it hit me… All that money, and her power is limited. She’s at the mercy of the men at the top of the pyramid; the men who took one of theirs – fellow male specie, Michael – and placed him in a position where they presume he’ll make more money for them. And I’m sure they paid him a boatload to do so.

So yes, this goes beyond celebritydom. This is business; real life. How did this happen to, I assume, the smart and savvy Kelly? I can’t help but see her in another light now – still confident and funny, however different. It may sound like I’m blaming the victim, but I’m not. Quite the opposite, actually. Someone else’s disrespect has cast a shadow on her; albeit, temporarily, I’m sure. But Kelly, like regular worker bees, has to watch her back from now on. And Michael – aside from the money – I understand why he’s moving on. He has an opportunity to move beyond his sports job and his play job to GMA, where his proximity to serious issues and a different kind of production will add another dimension to his career. Best wishes to both of them.

Always be prepared for your next act.
Posted by Anita at 6:38 PM

I too enjoyed their on air chemistry. I Don't blame Michael, though I think he may be making a mistake, I assume he was told to keep it hush hush, possibly because they feared what Kelly might do...horrible to disrespect her like that, I would not be surprised to see her try and stick it to ABC if she gets the opportunity.

I am very aware of this duo but I must be honest in saying that I only saw an episode or two with them because I rarely watch television in the daytime and I have no device to record anything. I wish Michael all the best.

Who? I'm completely lost! However, I hope the mammo went well. We're in CA to escape the snow.

I've never watched the show. I know Kelly Ripa from the refrigerator ad where she dances through the kitchen! I'm so out of it when it comes to television, just have a few favorite shows.

I watched Regis and Kelly pretty faithfully when I stayed home. Michael came aboard right when I started back into the work force, so I never watched them together. I did follow this story though, just because I think it's a great show, and I like her on it.
I think you're right, she'll be watching her back. A good lesson for all of us, I suppose.

I never watched the show, but I've seen the headlines and know the story for the most part. I do know how people can become comfortable with TV personalities and be disappointed when the relationship ends. From what I know of this story, it may have been the right move for Michael in the long run, but was handled very poorly. I'm kinda hoping Kelly gets some satisfying revenge :).

Gotta admit it, I'm only dimly aware of Kelly, and not at all aware of Michael so I won't be missing him, but sorry for your loss. I had to look up the news on this and I give Kelly credit for speaking up about her feelings.

Unfortunately I have never watched the snow in my life :)

Never watched that show. May be when I retire or later in the reruns. Thanks for sharing though. Sounds interesting.

Hi Anita!I watched Regis and Kelly, so many times but I've looked up Micheal after i read your post. New to me:-) I've never watched them together. Best wishes to both of them.

I never watch TV so haven't heard of the show either, but I assume it may not be on here in the UK.

I don't know the show, but I did read about the slam she received in not being informed as to the change. Women --- we will someday soon receive the respect we deserve. Seems stupid we have to fight for it.

Bbet99 as a trusted online soccer betting site provides a variety of online gambling games and soccer markets from the biggest league to the smallest league. do not forget that there is an Indonesian league which is more livened up to this gambling ball game you can get only at https://bbet99.fun/
BOLA ONLINE
Agen Bola
Taruhan Bola