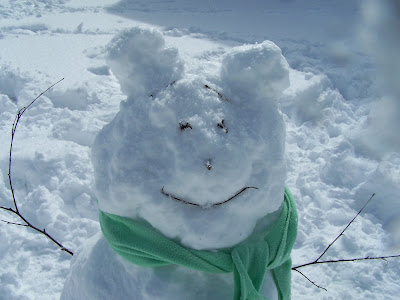 I Googled that phrase and found that many bloggers have already written their weather related stories. Here’s mine.

It started on Sunday, March 1, and ended the next day. Over eight inches of the beautiful, pure white stuff came down. My kids were out in it when only the first couple of inches had fallen. The large bowl was placed on the deck for the snow cream, and the first snow man was built. (He met his demise soon after though, because he was put together so hastily.)

Monday morning – the kids were up early and ready to go out. Mallory, my eight-year-old, had to be reminded to eat something filling; I knew the first round of playtime would last at least a couple of hours. I was already in management mode.

After a quick breakfast, I had to find boots that fit everyone, warm waterproof gloves, hats, and snow pants. Hayley, my thirteen-year-old, did not have snow pants. She kept on her pajama pants, then layered on sweat pants, and (at my request) a pair of my old nylon warm-up pants to seal her in. Kelly, my ten-year-old, wore size six boots on her size four feet. Mallory wore bibbed snow pants that ended just below her calves instead of at her ankles. The seat of the pants fitted almost like the pants that teen-aged boys wear hanging off their butts. It’s a wonder she could walk.

No one cared about the clothes. No one cared that the snow caught us before I could shop. We improvised. My friend across the street who has five children, gave me pants for Mallory. I gave another neighbor boots. My family, four other families, and our dogs, spent time sledding in each other’s yards, building snowmen, and socializing. It has become tradition for us; like waiting to see Santa come down our street on the fire truck at Christmas time.

The kids were out of school three days, and had a delayed opening on the fourth day. As they get older, it has become easier. When the kids were younger, I had to get them layered in clothes to go out. It would take forever! I’d be hot, they’d be hot – what a chore!

Now, my job is to clean wet floors as they come in and out (somehow they occasionally miss the rugs at the three doors of choice), make them put their wet things in the dryer as they warm up for the next round, let them have friends over, and keep the kitchen stocked with snacks, drinks, and easy-to-prepare food.

Whether your kids are babies or school-aged kids, the parental snow duty is worth the change of routine to let them experience the joy that comes with it.

Don’t have kids? Empty nest? It’s still worth at least a half hour of fun. One of my friends decided to build her own personal snowman, and proudly sent a picture of it to me on my cell phone.

Do you enjoy snow?

Snow knows no age boundaries. I have told many people how my 20 year old son was helping your 8 year old daughter with the snowman. By the way, you looked great on the sled!

BETH, see you on the slopes of your yard next winter! Here's (a toast) to making snowmen...and, I finally clicked enough to enlarge the picture of your crew to see them.

I'm no fan of snow.. not. at. all.
my boys are still babies, so they don't really know what they're missing when they're not allowed to play in it. They each got snow boots for Christmas that they love to wear at any given time... too bad they felt hardwood way more than the white stuff! lol

PINKLADY, Enjoy that obliviousness while you can. When they discover the white stuff, have "your" boots ready...and not for the hardwood floors!

That is the cutest snowman or snowcat I have ever seen! And I sooooo relate to cleaning up wet floors constantly when it snows!!!! Thanks for stopping by my blog.... your's looks really fun. :o)

MIKE AND MER, My kids said it looks ike a snow bear. :)

I thought it was kind of cute too.

December's snowman was built in the neighbor's yard. I have a feeling we'll get more snow before winter 2010 is over.