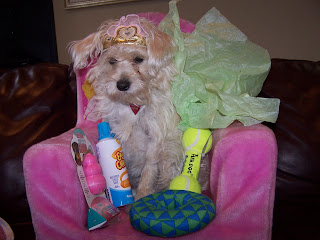 Layla adorned by my kids in birthday tiara 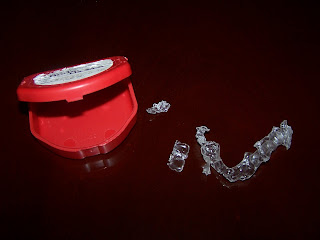 What’s this? Scroll to the bottom to find out. 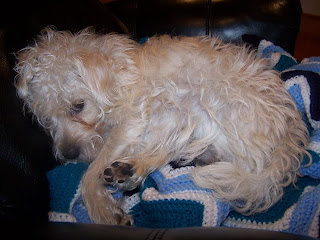 OUR recliner, OUR afghan, HER resting place
Our newest family member is Layla. On April 6, our Schnoodle (half Schnauzer, half Poodle) turned one year old. We were away during spring break, but my friend Robin, and her family, had Layla as a guest in their home. Layla celebrated her birthday with them and their sibling Shih Tzus, Miley and Chester.

The little darling is my girls’ first pet. They had been asking for a dog for at least three years; especially Mallory, who was five years old, when the begging, bargaining, and negotiations began.

As I was growing up, my family had three dogs, a cat, a bird, and an aquarium full of fish – not all at the same time though!

Each stint and attempt at being a loving pet owner lasted a short period of time, except for the cat, Amy, who reigned in my parents’ home fourteen years. The dogs mainly lived in our fenced backyard and I never bonded with any of them. The bird was colorful and pretty and…well, can you play with a bird? Same for the fish – we had a huge tank full of beautiful fish that were fun to stare at occasionally, but when the maintenance proved to be more than my stepfather wanted to handle, that hobby fell by the wayside, too. To his credit, he started with a ten gallon tank, later traded in for two twenty gallon tanks, then traded in for a fifty gallon tank, all over a couple of years or so. Lots of fish came and went.

I say all of this to say that I was not craving a pet, which meant to me, another living creature to take care of.

What changed? The kids wore me down. I’m kidding.

Actually, I live in a large neighborhood where it seems that half of the houses have a dog or two living in it. I was able to “study” my friends and neighbors to get a vision of having a dog. Beth had two dogs (now three). Kim had gotten a new Shih Tzu and Robin had gotten her new puppies. Also, my last child had left babydom; she was in second grade. I thought, “Maybe I can handle a new baby now.”

While I was “studying,” my girls were salivating. “WHEN ARE WE GETTING A DOG!”

On June 11, 2008, we picked up Layla from the breeder. And yes, I “very much” have another creature to take care of, but she’s worth it. The potty training, the carpet cleaning, feeding, and the walks have not taken me over the edge; and my husband and the children are taking their turns at helping.

Layla is playful and affectionate and all of us spend time cuddling the scruffy little hairball. My husband and I made a good decision – our girls are growing up knowing what it’s like to love a pet, which seems as intense as loving a person.

What kinds of pets do you have at your home, and what are their names?

p.s. Like the Obamas, I was ok with a shelter dog, but we have allergic people in our household too. I take allergy shots and my kids sneeze like crazy during this time of year, so…they got Bo-bama, we got Layla – hypoallergenic dogs.
Answer to the question and picture above - It WAS my Invisalign retainer. Guess who chewed it up. I won't tell you what it cost to replace it, but when I wrote the check...OUCH!
Posted by Anita at 4:01 PM

Anita, None of our dogs have ever looked so fetching on their birthdays. In our house we have a rule that if you leave your retainer where the dogs can get it, you have to pay for the new one. I bet you're glad George doesn't have that rule.

BETH, my retainer was on my night table. Now it goes into the "closed drawer" of my night table! Have any of the kids ever had to buy a new retainer? :-) Oh, and I'll tell the girls of your compliment to Layla.

Love the photo of Layla- a very tolerant dog! The most we have done is quickly put a pair of deally boppers (those head band things) on our dog and quickly taken a photo!
Oh, Bob recently got mad and chewed up a small Navajo rug (there was lots of disturbance at time, people were over, we were all eating and he was locked away...in the room with the rug).(Luckily I love him more than I love my rug). Probably cost around the same as your retainer!

JUDY, your rug, my retainer...we live and we learn. It's amazing what they can find to get into. You're right though - when you compare the lovable dog and a "thing" the lovable dog comes out on top (lucky for him or her!)