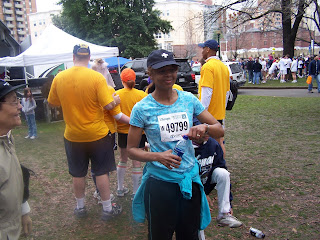 Getting my H2O as Mom approaches from the left 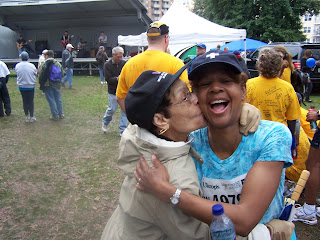 The "Congratulations!" kiss from Mom

The event was the Ukrop’s Monument Avenue 10k. I was lured into doing it by my friend Teri, who ran last year for the first time. While she was training, I was impressed and fascinated with her dedication. When she asked me to consider doing it, I said, “maybe next year.” That’s the standard response that most people give. But throughout the year, I’d see her continuing with the sport, running through the neighborhoods, for distances that were hard to imagine myself doing.

Another influential person was my stepfather. EJ has been running marathons, half marathons, 10 mile races, 10k races, etc., for thirty years or more. I was around to cheer him on back in the ‘80s, but it was not until this year that I decided to follow in his footsteps. (Don’t think I’ll be running any marathons though!)

This 10k and the training were the longest distances I’ve ever run in my life! The most I’ve done, nonstop, is probably less than two miles. In particular, after having each of my three children, and realizing that there is a difference between excess fluid and fat, I would hit the sidewalks of my neighborhood – walking and jogging, walking and jogging. The motivation was clearly, weight loss.

Back to Teri: She shows up in 2009 and asks, “Are you running the 10k? There’s a training team starting up.” Before I could hem and haw, I quickly said, “yes,” which really meant that I would go to the training, once, to see if I felt the desire.

I must have felt it, because every Saturday for nine weeks, I met others at the local YMCA to run, and I did fairly well sticking to the training throughout the week. By week number nine, I was ready.

On the 10k day, my mom, who had come from out of town, my husband, my children and I headed downtown so that I could DO it! And I DID it...in a whopping one hour and twenty-five minutes!

Will I do it again? Probably. Why? Because as I crossed the finish line, a competitiveness popped into my spirit.

During the run, I had no desire for a certain time. As I was jogging along, I was actually looking at all the bands and cheerleaders and people shaking cow bells, and a group of beautifully dressed Chinese people doing tai chi. I did not push myself; I just wanted to stay calm and finish.

Later at home, I checked my chip time on the computer. Then I started checking all my friends’ times. Teri ran it in 58 minutes. There were three or four others that came in just over an hour. “Can I do better?” I thought. “If I had not started out in the midst of the walkers, and not have been sightseeing, would that have made a difference?” I’m fifty-one and my friends are still in their early to mid forties. Can the old girl’s stamina be increased?

All in all, it was a good experience. My family proudly watched as I crossed the finish line. I had no aches and pains. Many close friends congratulated me on finishing. It’s another page for my “Now I get it” category – another personal enjoyment that I’ve allowed myself to have.

Any challenges accomplished in your recent past, or that you hope to accomplish sometime soon? It can be as simple as breaking a habit or as extreme as skydiving.
Posted by Anita at 5:59 PM

Labels: Feminism, Now I get it