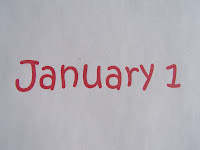 I don’t have any New Year’s resolutions. Most of the specific things I said I would accomplish during a particular year did not happen. Simple things - like taking care of the mail everyday so that it doesn’t pile up. Difficult things - like finishing a manuscript and getting a literary agent. These are only two examples.

What I “do” hold on to, though, are my plans and dreams. I’m learning how to enjoy the journey of life without putting so much pressure on myself to “be” and to “do.”

A very good friend and I used to dream and plan our lives as future entrepreneurs. We dibbled and dabbled with ideas for seven years. Eventually, we went in different directions. I married and had children; she separated from her husband and began a new career (steady job with benefits) with a state government agency.

Reality struck both of us.

I learned from my relationship with Debbie. She spent so much time and energy chasing illusions. It was like, desperation - stemming from childhood issues, insecurity, and a bad marriage. She’d build herself up so high with an idea and the work she’d put into it, and then deflate like air coming out of a balloon when the idea failed - and then depression would creep in. But I give her credit – she was strong-willed during those wannabe-entrepreneur days. Somehow, she’d bounce back and do it all over again with another idea.

I’m not against New Year’s Day resolutions. I’m sure there are lots of people that find it helpful to make a commitment on January 1, and many are successful by year-end. For you, I sincerely congratulate you on your diligence.

For me, December 31 just flows right into January 1. Nothing changes overnight, but my plans and dreams are still with me, producing delightful little images that motivate me throughout the day when I need to get beyond that feeling of being overwhelmed.

Sometimes those plans and dreams can change before the day is even over, and I can evade the feeling of failure (didn't get that laundry done), and get excited all over again.

So I’m a little fickle.

Think back to five or ten years ago. Are you on the path that you thought you’d be on? Have you succeeded at the plans and resolutions you made in the 1990s or early 2000s?
Posted by Anita at 3:36 PM

In some ways I have accomplished some of what I had wanted and hoped for but then in other ways, as life changes daily, the goals change as well. Five years ago, I had no idea that I would be divorced and engaged to marry and be a step mom...nor did I plan that I would not still employed at the school where I worked 5 years ago.

I guess what I'm saying is that little goals are more easier for me and if those little goals turn into something bigger than there's a sense of accomplishment. For instance, here is a peek at one of my goals...wash my face every night with astringent and stop going to sleep with makeup on. Practice the piano at least three times a week and draw three times a week and write every single day.

I too, anticipated and wanted the children's book to be published last year but it didn't happen but there is determination for it to happen this year, even if I have to show up at an agency wearing nothing but a lampshade! LOL

Im with you...I dont make resolutions. But Im also one of those that let the mail bulk up in the box before Im forced (the mailman actually forces me) to go get it.

I would say that Im exactly where I had hope to be, theres a few things that arent perfect but they never are right!

Love the title. I have a lot of wishes for new year.But resolutions..Lol, i have only two which I believe i could keep.Life is full of surprises.

OMG Anita, if you read my post yesterday, you know I'm not anywhere near where I expected to be! 5 years ago I sure didn't see this coming but I wouldn't change a thing and I think that's what counts the most!

About 10 years ago when I was traveling in NY I found a parenting book and had a vague dream of translating and publishing it in Japan. A few years later I took a translation course online (took me 5 years to finish) and started a job as a freelance translator. Job opportunities didn't come so often, but I feel coming closer to my dream of publishing my translation. At the same time I had kept sending my translation proposal to many publishers for 3 years and last March finally my plan was adopted and I'm now finished with the translation. Soon the draft copy is supposed to be sent from the publisher. I'm so excited! I've been lucky about my dream although the progress is much slower then I thought.

My dream still keeps going. I want to get another chance of publishing my translation after what I'm doing is done.

Goodness!! If someone had told me 5 years ago that I would be living the good life in Oregon I would have told them they were crazy. Life changes so fast sometimes that it takes your breath away.

I almost died 3 1/2 years ago and that changed the way I thought about so many things. Getting sick made me a better person. I know that's hard to believe but it did. :)

It also slowed me down. I no longer work outside the home and I've been happy every single day I've been a homemaker. Hubby and daughters are happier since I'm not all stressed out all the time.

I no longer look to big "things" to make me happy. I found out the hard way that it really is the simple things in life, family and friends that matter.

haha.. Okay I admit that some of my BIG resolutions were forgotten as the days go by.. Practically because I'm lazy. I used to think I'll do it tomorrow.. nah.. maybe next week.. next month. And in the end, I didn't do it at all.. hehe..
So what did I do then? I think. I think about what I really want to do before I write down my resolutions. My fav activities, simple changing in manners *like being more patient* haha, and things like that. Of course I'm being flexible too. If life suddenly offer me better things that far from my path now, why not? After all, life is a journey. Why not make it as an adventure? ;) Have a nice day Anita!

Your question as to whether we are where we thought we would be 5 years ago really hit at my age. In a way I guess that I am living alone and my husband is in the rest home gone from me as my best friend and confidant and sharer of memories and I knew it was going to happen some day as he has had Altzeimer's about 7 or 8 years now. But I didn't face it. You know how you always think things won't happen to you--just to someone else. So what this New Year will bring, I have no idea. You younger ones, be sure to cherish each day and live life to the fullest for it goes by so fast.

I'd say I'm on the path I want to be on, with writing such an important part of my life, growing in knowledge with it with each passing year, always moving forward. Happy New Year to you, Anita!

Good for you for just taking it one day at a time!

Looking back ten years? Yeah, I think I am where I want/expected to be, not that I really put much effort into it. Funny how that happens...

CHOCOLATE, TRISH, YONCA, MENOMOM-DEB, MOMKORI, MARLA, PINK, BERNIE, BUCKAROOMAMA, JOANNE - all different paths to get to where you are now, and accomplishments that have given you much satisfaction, and life lessons. Very good.
It's interesting how the similarites are grouped somewhat by age in what you all have said.
The young, middle, and later years - you all are inspiring.
Thanks!

Happy New Year to You too!

People Who Know Me Would Say: said...

My life is so entirely different than anything I could ever have imagined. If someone had told me ten years ago that this is where I'd be today, I would have laughed out loud!

I'm with you about December 31st flowing right into January 1st. They're both just regular days for me.

I've learned that life is what happens while you're making other plans.

Just popping by to say hello and thanks for following my blog. I'm not much of a resolution person, but I do intend to try to get out and visit more blogs and get to know more of the people who stop by to visit mine.

Oh, and I'm either Kari or KariLynn depending on the situation. Family and close friends use the longer version, and I've gone back to it as a writer because it separates me from the pack of Kari Dells that shows up when I google myself, which could be important if I ever get published!

such a great post! very thoughtful! I dont make resolutions ;) at least not the "New Year Resolutions"

I loved this post. It was beautifully written and really made me think.

What a great post, and as you know, I feel similarly....

I am happy to say I've accomplished a lot over the last decade...I wanted desperately to be a mother and I am one. Now that I am, I need to move forward with more goals---which like yours, include writing that book that's been in my head forever...we'll see.

Hi Anita, just want to thank you for visiting my blog and your nice comment....I take it as a compliment to be mistaken for the other Bernie, she is quite a lady. Have a great day......:-) Hugs

I don't plan too far ahead. I'm mor the type to go with the flow.

I'm not one to make "BIG" resolution goals, but rather character goals. I've probably failed at those as much I've gained, but at least I try and gain some.

I'm the same. I don't make new years resolutions. I simply maintain the same hopes and dreams. One in particular has been with me for many many years. Some years it comes closer, some years it goes further away. Now, I have a new dream to add to the mix.

Yeah....that's why this year I decided that I was not going to be specific...practicing mindfulness in daily habits has already helped me make some positive changes!