Standing in Line for a Doughnut 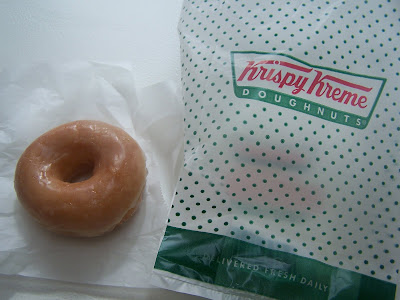 I weighed the pros and cons, then tried to resist, but the doughnut won.

It is a hectic morning. I spill milk on Hayley which means a change of clothes and that I will have to take her to school. As I’m dropping her off, she suggests that I put gas in my car and stop by McDonald’s for breakfast. Initial thought - good idea. Next thought – “Do I really want pancakes or hash browns or a sausage biscuit? There are leftovers at home, or I can have cereal with refreshing cold milk. I’ll eat at home.”

As I pull into the gas station, the first thing I see is a Krispy Kreme sign. "Oooo… Ahhhh…. I haven’t had a soft, sweet, tasty doughnut in a while."
.
My gas tank is almost empty, so I have to stand here for at least three minutes as the tank fills. I watch the going-to-work traffic; anything to take my mind off the doughnut.

“The leftovers and the cereal, Anita!”

My eyes keep going back to the Krispy Kreme sign.

The tank is still filling. I watch men dressed in jeans, hooded sweat jackets and work boots, getting gas and a few smoking cigarettes. I think of how different we all are; most of us doing something to contribute to the freedom and success of this country. Some of the men appear Latino and I assume they speak Spanish, which lead my thoughts to the continuous debate over Spanish being a second language in this country... Still, I can’t keep myself from going into the convenience store.

“Where are the doughnuts? I can’t find them!” I have a chance to leave, but I’m steadfast – “I’m going to find those doughnuts!” Twenty seconds later, I spot them in the center of the store. “Hmmmm…the glazed, a crème filled, or chocolate covered?” I summon my sense of taste to determine what will be the most satisfying. The crème filled is eliminated first. I love chocolate, but the simplicity of the sugary glazed wins me over.

I have my doughnut and I'm standing in line behind a man who’s buying a jug of tea for the day, his lunch, and something else. An issue at the register is going on and I’m still waiting; still watching the men to see what they are buying, watching the woman working behind the counter, wondering who will buy a lottery ticket. Finally, a man opens another register, and calls me over. “Gettin’ your sugar fix?” he says. He probably figures I need one as I stand here with “morning hair,” and sun glasses to keep from scaring anyone.

I’m three minutes from home, but I eat the doughnut before I get there. “Ohhhhh, I wish I had another.”

Was my doughnut worth the ninety one cents, six minutes of time, and two hundred calories?

Yes, it was. As I stood in line, I got to think about life and people and where I fit in, but mainly, it was a delicious treat.

Do you treat yourself or resist the temptation? Or, do you have a habit/addiction that costs you $4.00 a day, (give or take)?
Posted by Anita at 3:13 PM

Hi Anita, oh yes, that donut was worth every penny! We have Tim Horton donuts in Canada and they are addictive! Just got my fix on the weekend after passing on them for weeks. So much for my attempt at weight loss although so far today, so good!

Creme filled for me! Sometimes we just have to have it. Today I was craving peanut M&M's and I walked past the candy counter twice and then snatched a package. Now I feel better. And it is Monday after all.

There is nothing better than a Krispy Kreme hot doughnut

At the risk of sounding like an ascetic curmudgeon (moi?) donuts (which no one spells doughnuts anymore!)just gross me out. The smell, the look give me a big yuck. I do enjoy other sweets though, but I find it very easy to eat one little square of chocolate once a day and be satisfied with that. I know I can have another little square the next day. I haven't always found this self control as easy as I do now- in my 20's I could eat fistfuls of chocolate candies or cookies with the best of them. Now I just don't...

Like Judy, donuts don't do much for me anymore. And I confess that I've never had a Krispy Kreme, although I've heard the hype!

Still, I say it was worth it for you. I LOVE to people watch, and sometimes we need to stray now and then to get a glimpse of things we might otherwise not see!

MENO-DEB, I haven't been to Canada in years, but I'll remember the Tim Horton donuts when I get there again!

JUDY, I should've stuck with the d-o-n-u-t spelling. It was that Krispy Kreme bag that threw me off. :)

I know other people that are grossed out by certain sweets, too. You have such a connection with natural food, it's no wonder.
Will a donut ever be gross to me? hmmmm...

ABBY, I hear that people in Colorado are some of the healthiest and most active in the country. You are right to stay away from those donuts! :)

THANKS EVERONE...ENJOYED THE COMMENTS AS ALWAYS.

Anita,
Funny you should ask that question! Just this past weekend I stopped at Starbucks for a caramel macchiato (extra hot). A drink I can't make at home and is a HUGE treat! (Also loaded with calories...Yikes!) That particular Krispey Kreme donut is my favorite too! Glad you enjoyed it!

SHARON, I knew there was someone out there that needs the Starbucks "fix." :) Glad you enjoyed it.

Good to hear from you!

I love to give myself a treat once in awhile and I can't think of anything better than a glazed Krispy Kreme donut and soy latte from Starbucks. It's good to fall off the wagon every once in awhile. LOL

I'm with you,people watching and food,love it. Thank you so much for becoming a follower of my blog. I am following you also. Looking forward to reading and getting to know you,thanks again.

I have missed catching up on your blog! I just like donuts period, but I gravitate more towards glazed if given a choice. Oh, who am I kidding?! I'll eat 'em both :)

JULIE, I'm picturing you with your soy latte and donut, sitting at an outdoor cafe. :)

Another vote in the yes column!

MY AIMLESS INFATUATION, welcome to my blog and thanks for welcoming me to yours. :)

HILARY, I appreciate an honest woman! :)

Get back to blogging when you can - until then, keep studying. All your readers and followers miss you, but you'll have a break...eventually.

Thanks for giving a few moments of precious time to mine.

ANYMORE COMMENTS OUT THERE? SO FAR, "YES" TO THE DONUT IS GETTING THE MOST VOTES. :)

oh yea, it changes but right now it is Mcdonalds med. coffee with cream, and a soft serve icecream cone!
Takes care of the little girl and the grown up in me!! LOL

You don't have to go to Canada to get Tim Horton's donuts. We lucky folks in Ohio have them as well and can I just say passing by one without stopping takes an incredible self-control---which I usually don't have!! Their coffee is absolutely perfect!!!! (Won't even mention the pumpkin spice donuts or the apple fritters...)

ANDREA, I have relatives in Michigan, and I'm due to visit them soon. Maybe I'll hop off the Ohio turnpike in search of Tim Horton's donuts! :)

ANOTHER "YES" FOR DONUTS...READERS, KEEP VOTING AND COMMENTING.