Family Time at the Football Game 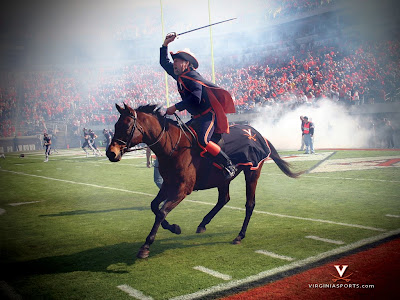 University of Virginia
Cavalier Mascot
http://www.virginiasports.com/
I was presented with a big decision: go to the first UVA football game of the season with my husband and three girls, or stay home alone (well, not totally alone; Layla the dog would be with me). You may wonder, “Why was that such a big decision?”

If you’ve followed this blog, you will recall my post about losing thirty minutes of solitude (July 13, 2009). Yes, I’m a girl who likes to be alone sometimes – in my house; not out on an errand! As a stay-at-home mom, that scenario does not happen often during the summer. When my husband told me he was taking the girls to the game, I had immediate visions of uninterrupted reading on the porch, a meal of my choice without anyone ogling it (except the dog), and completion of a household project.

But then…I was struck with GUILT!

Only a day or two before, I had just lectured my daughters about our lack of “family time,” partly because of circumstances beyond our control this summer, but also because we haven’t planned much, and that we need to get better at it.
And then, what happens? We get an opportunity for all of us to do something together. It took a couple of days for the words, “I’ll go” to come out of my mouth, but it did. My husband was pleasantly surprised at my decision and the girls were happy.

The five of us, and Aunt Carla and Uncle Adam, loaded into the SUV and off we went. I don’t see our friends much, so I found it enjoyable to socialize with them, too.

UVA lost the game, but it was a fun outing. The weather was great and the pre-game show was entertaining. Paratroopers floated through the sky above the stadium where they eventually landed. Soon after, the Cavalier mascot galloped onto the stadium on his horse. No big deal to the faithful who come to all the games, but a thrill for me as I have recently become a fan of horses. (See my post dated August 9, 2009.)

We stuffed our faces with concession food, as the team sunk further and further into defeat. I varied my interests by watching the sky turn into a cloudy midnight blue, the color of a Crayola crayon. It was beautiful.

Family time that includes everyone can be challenging for some households, so think twice before passing up an opportunity.

How does your family rate at spending quality time together?
Posted by Anita at 9:53 AM

I love quality family time hiking, biking, watching a movie, eating dinner together...but I so dislike football that that would be family torture time!

Anita, we are definitely sisters at heart when it comes to solitude. I LOVE spending time with my family but I also LOVE being home alone to "complete projects, reading" and just having uninterrupted time.

I know one thing to be true: all women have built-in guilt buttons that turn on when they become moms!

InSEASON MOM, your somment is simply stated, yet still profound. Thank you "sister." :)