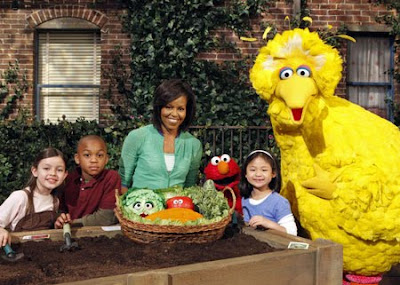 warning: clicking on some of the links have volume - mute if necessary
.
Today, Sesame Street celebrated its 4oth birthday show with an appearance of the First Lady, Michelle Obama. The promotions of the show were seen by my eleven year old daughter, Kelly, who promptly put it into her mental database. She knew she’d be able to watch because she’s been ill and recuperating from a virus. (Was it the infamous Swine Flu/H1N1?)

Her interest was low keyed, yet it was obvious to me that she really wanted to see the show – a show that she hasn’t watched in years. She turned on PBS at 8 a.m. looking for it. It wasn’t on. She turned back to the channel again at 8:30 a.m. - still not on. Noticing a pattern, I went to pbskids.org, found the schedule, and told her the time of the show - 10 a.m.

I hadn’t said that I would watch with Kelly, but she’d assumed I would. So, I pulled up the ottoman close to the sofa, put my feet up, and pulled part of her blanket around me, where together we snuggled up to watch Sesame Street.

Kelly and I pointed out all the Sesame Street changes as we watched. The theme song is a bit jazzy now, and Burt and Ernie were in claymation. We noticed Elmo’s lack of ears – any thoughts that would keep us patient for the emergence of Michelle Obama.

Just as my head fell over into a nod, Kelly announced, “There she is Mommy!” And there she was, surrounded by the Sesame Street monsters. We watched as she talked to the furry characters, and real kids too, about planting vegetable seeds. Three minutes later, it was over; she was gone.

Kelly looked at me and exclaimed, “That was it? Vegetables? That’s what she always talks about!”

Since Michelle Obama and her girls came on the scene, my daughters have been quite fascinated with them.

Because the Obama kids are not on TV much, my daughters are limited in how much they can talk about them. I’m sure Kelly was hoping that they would’ve been on the show today with their mom.

I kinda like this growing interest my children have in the wife and children of the President. It’s a nice addition to Miley Cyrus.

Who excites your kid(s)? Who excites you? :)
Continue to comment on "hot topics" Swine Flu, Vaginal vs. C-section, or any other posts. Comment notification allows me to see all new comments.
Posted by Anita at 10:39 PM

So very sweet! I watched Sesame Street just recently with Baby Boo and I was blown away by how many changes there are. The kids are now grown up that are on the show. Still, it is one show that will always be a favorite of mine to watch.

What a shame Kelly was disappointed after waiting all morning for that limited appearance by the First Lady. I'm like you though, hopefully those first children will be great role models for the girls of her generation.

I guess Dora excites my daughter the most these days which may not be a good thing considering how often Dora packs up that backpack of hers and hits the road unsupervised to go on an adventure!

CHOCOLATE, you get to do everything all over again with Baby Boo. You'll be such an expert. :)

MENONEWMOM-DEB, You might need to put one of those ankle "whereabouts" sensors on your little explorer. :) Dora was a favorite in our house too.

I think it's sweet that you snuggled up together to watch. It's been about 15 years since Sesame Street days for my kids and me.

HILARY, Yes, my memory will be of the snuggling. :)

That's cute that she was all excited. Too bad it was "that's it? Vegetables?"

My kids - if not apparent from my last blog entry! - get excited over certain video games. Number 2 son is really into transformers now too. My youngest still appreciates Legos. I don't think boys connect with real people/celebs as much as girls do, except for maybe athletes.

ABBY, Good input! I hadn't thought about the LACK of attention boys have for celebrities. But you're right about athletes - my BIG boy can tell me where every player went to college, past and present teams, statistics, etc. How do you handle THAT living in the man cave! :)